Smile! (You don't have to use stamps)

Once again, posting a bit early this morning. I hope to have time to do the WSC a bit later today and if I do, I"ll be back again later. A few weeks ago I was scrolling through the Kwerner videos that I had missed while on vacation and came across one that she did showing how to make a background using diagonal strips of background paper. The technique inspired me so I decided to give it a try. 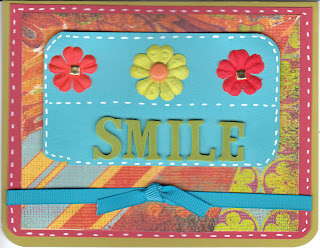 I had gotten some American Crafts "Thickers" letters, again inspired by Kristina (where would we be without inspiration from her?!) and decided to build the card around those. The paper that I chose to make the background with was from Basic Grey's Color Me Silly collection, which I mounted on Riding Hood Red and Kiwi Kiss paper. I struggled with trying to find the right blue shade to use and ended up going with Turquoise. Now, looking at it on the computer I'm thinking I should have gone with a yellow instead of the turquoise. However, it actually looks ok IRL. I couldn't decide what stamp to use in the center. I didn't want to use anything that was "busy" since there was so much going on with the background design. In the end, I pulled out my Prima flowers and brads and called it good. I added the stitching lines and that was it. So, what do you think? If you get a chance, try this technique, it's really quite easy and the results are often pleasantly surprising.
Have a good day and if I'm not back later, have a great weekend!
Posted by Dori Shelton at 6:39:00 AM

This is a bright and cheerful card! You did a great job with the background mixing colors and patterns. It has a fun look to it!