I'm sorry I didn't have a column last week. Time just slipped away from me and then it was too late! So, let's jump right back in and see what's good and what's not so good in PC this week.

Ok, so I have to admit I'm really really liking the new Michael. At first, I had mixed feelings because I really thought the reunion scene with Sonny would have been a little more heartfelt if that had been Dylan Cash in the bed. On the other hand, when Sonny told Michael the truth about what happened, I thought they both did a superb job.
--Speaking of Michael, I know the kid just woke up and he's angry at Carly; but I gotta tell you I do feel sorry for Carly. No mother deserves to be treated that way by their own child. I was glad to see Sonny take a bit of an authoritative tone with him when he told Michael not to be mad at his mother.
--Have to admit I become more and more intrigued by the Rebecca mystery. I am anxious to see what happens with that.
--I think that Helena will be more involved in the Ethan mystery, than the Rebecca mystery.
--Did you catch the comment made by Holly about always liking the name "Em 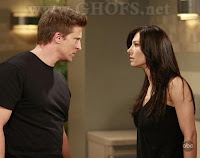 ma"? I thought that was cute and clever. (Holly is played by Emma Samms)
--I've enjoyed the scenes with Sam and Jason as well.
--Not sure how I feel about the whole Johnny and Olivia thing.
--I also can't figure out why Sonny keeps showing up at Olivia's either.
--I liked the scene with Luke and Elizabeth. I thought she had some good points to make about Lucky.
--I was surprised to find out that Luke and Holly were just meeting for the first time.

Ok, so now on to the news and scoops that I've picked up on fr

om around the net:

--Helena will return
--Sam continues to support and advise Jason
--Holly finally tells all just before she leaves town; but does she tell the truth?
--Claudia falls down the stairs. She also uses the baby to manipulate Sonny against Jason.
--Mercedes (the nanny) will be involved heavily in an upcoming storyline with Mayor Flloyd's wife (Martha Byrne)
--Michael doesn't just want to live with Sonny, he wants to work for him as well.
--Michael takes his anger out on Robin.
--Robin returns home and acts the opposite way she did before. She doesn't want to leave Emma's side.
--Michael collapses
--Do Ethan and Rebecca share a past?
--The truth about Rebecca will be revealed the week of June 1st
--Robin clarifies a few things for Ethan
--Rebecca and Elizabeth have it out.
--Julie Berman has reportedly been reading with potential Dante actors. Could this mean a storyline for Lulu and Dante?
Have a great week!
Posted by Dori Shelton at 12:00:00 PM

Thanks for the update! Looking forward to the upcoming episodes! :)