Time once again for my weekly dose of what's good and what's bad in PC; as well as giving you all the latest scoops and news that I've heard around the net this week.

--Happy to see Robin back. So far, so good. She does seem genuinely happy to be back with Emma. It'll be interesting to see if it stays that way. Isn't the baby who plays Emma too precious?! She reminds me of my own little dark-haired angel when she was a baby.
--So, now that Ethan isn't Luke's son (wink...wink) I wonder what will happen with him and Lulu? I actually like them together, so I really wish they weren't going to be related. Somehow though I think they are.
--Still loving the new Michael. Can't wait to see his hair. The scene in the hospital where he blew up at everyone really brought home the point that he's not a youngster any more.
--Monica and Edward always make me laugh.
--I liked the scene with Elizabeth and Rebecca. I always like it when Elizabeth gets to be a little fiesty since she's 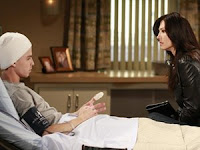 such a laid back sweet kind of girl.
--Agent Raynor was a pleasant surprise. I quite like Mark Pinter and hope he's used a bit more. Here's a thought: How about an actual real relationship for Alexis?
--Here's another thought: Sonny and Olivia...so much better than Claudia and Sonny or Johnny and Olivia.
--Gotta tell you, I was a little disappointed that Michael didn't react a bit more negatively to the news about Claudia and his Dad. Especially after the crap he gave his mother. Then again, I suppose that is what makes it all so interesting.

Ok, so what's the latest on the scoops and news?

***The truth about Rebecca is revealed. If you don't want to know, stop reading now!***

--Sorry ladies, the adorable Bradford Anderson (Spinelli) is officially off the market. He recently became engaged to his girlfriend, Kiera O'Neil (pictured here with him)
--Billy Dee William's return to Port Charles is an open ended role. There will be some discussion about a son and or a daughter, bringing mystery to his personal life.
--Rumor has it that the role of Dante has been cast.
--Alexis

becomes entangled in a scandal involving the Mayor and his mistress, (yes mistress) Things get really complicated when the Mistress dies. What happens when Kristina gets involved?
--Could Matt be following his father's path...to alcholism?
--Kristina has no problem giving Sonny an earful.
--Micheal and Kristina bond deeply.
--Now onto the Rebecca: The truth is that she is Emily's twin sister; and has known this little fact the whole time.
--Lulu realizes somethings up between Ethan and Rebecca.
--Claudia discovers Olivia's secret.
--A new character, Dominic, comes to town. He's involved in one of Claudia's schemes. (pictured here)
--Crazy rumor: Either Jake or Cameron will die, sending Elizabeth off the canvas for a while. (mmm...believe that one when I see it!)
--Edward entices Michael with a big piece of ELQ to keep him away from the mob. Perhaps this will be the one time Edward and Sonny agree about something.
Ok, so that's all for me this week. Have a great weekend!
Posted by Dori Shelton at 6:13:00 AM