I realize it's been a while since I've posted a recipe; and well honestly...that's because I've sort of run out of original ideas for what to cook that is sharing and picture worthy. No one is starving or anything, we're actually eating some really yummy recipes. However, I must give credit where credit is due, a lot of what I've been cooking for the kids and I lately have been recipes I've found and pinned to my Eat, Drink and Be Merry Pinterest board. Wait...did I just say that I've actually been cooking recipes I've pinned?! That's crazy, right?!!?
So, I decided to do a little recipe round up of things I've actually made over the last week and a couple of little thoughts about them. I hope you find some "Pinspiration" to cook a couple of them as well! 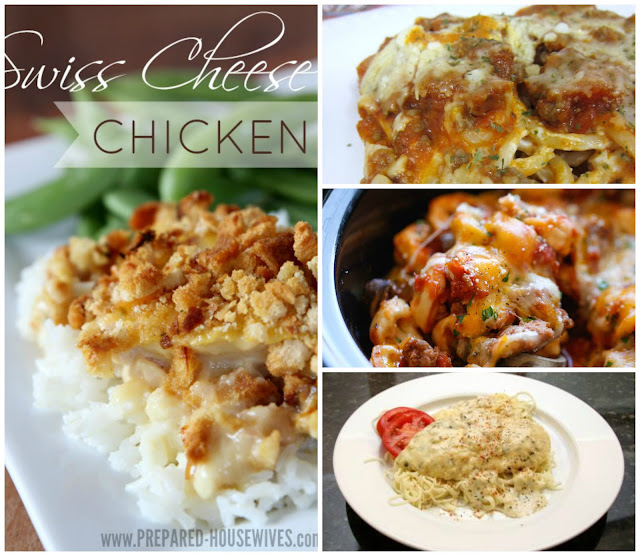 1. Swiss Cheese Chicken. I just made this recipe on Monday. It was also very tasty and another one that made a lot for us. We had just enough for some leftovers last night as well. I served it with pasta and home-made biscuits. I used Provolone cheese instead of Swiss or Pepper Jack. However, I will say that I think next time that I think I'd just leave the cheese off of it. I don't really think it added anything of great flavor or importance to the dish. Also, I found that I had to cover the dish the last 10 minutes or so because the stuffing on top was getting a bit too crispy.

2. Baked Cream Cheese Spaghetti. This recipe was really good. It makes quite a bit though, so I actually cooked it and invited some family over for supper to share with us. It would have been way too much for just the kids and I. It was also really thick, the cream cheese made the pasta stick together quite a bit as it cooled. I think when I make it again, I may add a bit of sour cream along with the cream cheese just make the pasta a little more pliable.

3. Slow Cooker Cheesy Tortellini. This is part of of my mission to use my crock pot a little more. It was very good as well. I think I added maybe a little too much tortellini to my sauce though, which wasn't a problem until it came to heating up the leftovers. The pasta was just too mushy after having sat in the sauce in the refrigerator over night. I really liked the flavors of the dish though and would definitely make it again.

4. Creamy Italian Chicken. This crock pot chicken recipe was another delicious success. I made the recipe pretty much as stated; but I did leave off the mushrooms.  It did make quite a bit of sauce, which may have been because I didn't use very large chicken breasts. I always forget that they tend to shrink up a bit as they cook. I took the leftovers that I had with this dish and turned it into a creamy chicken and corn chowder with bacon and onions the next day. So it was great as a double duty dinner!

So, those are a few things to share with you. It's not a lot, I know...but honestly, I don't cook a big sit down dinner every evening. Sometimes we just have chicken tenders and mac and cheese. Many times we have left overs.
What have you been making lately? I would love to know! Leave me a comment if you can!
Have a great day!
Posted by Dori Shelton at 9:41:00 AM